In the December 1932 issue of Magie¹ (the monthly newspaper of the German Magicians’ Association) an interesting article by Ottokar Fischer appeared. He wrote about the May 1931 assembly of Hungarian Amateur Magicians where a participant revealed that Houdini was born in Budapest, as Erik Weisz.

It took until 1972 –another forty years– before the Houdini Birth Research Committee revealed in a report the full truth of Houdini’s Hungarian origin; making the 1932 Magie article even more of a milestone.

The original three-page German article and its English translation can be read in its entirety for the first time in the following pages.

We would like to express our sincere appreciation to Mr. Michael Sondermeyer for providing us with the original article and our deepest gratitude to Magischer Zirkel von Deutschland for permitting us to republish it. 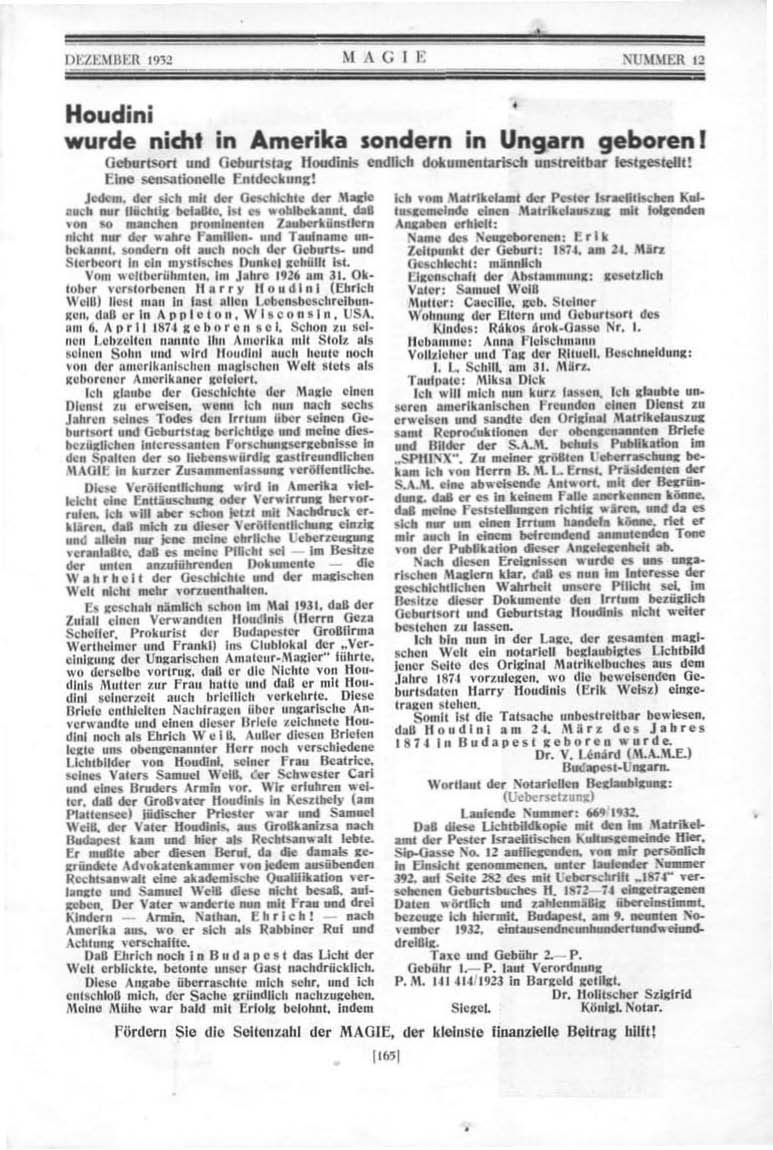 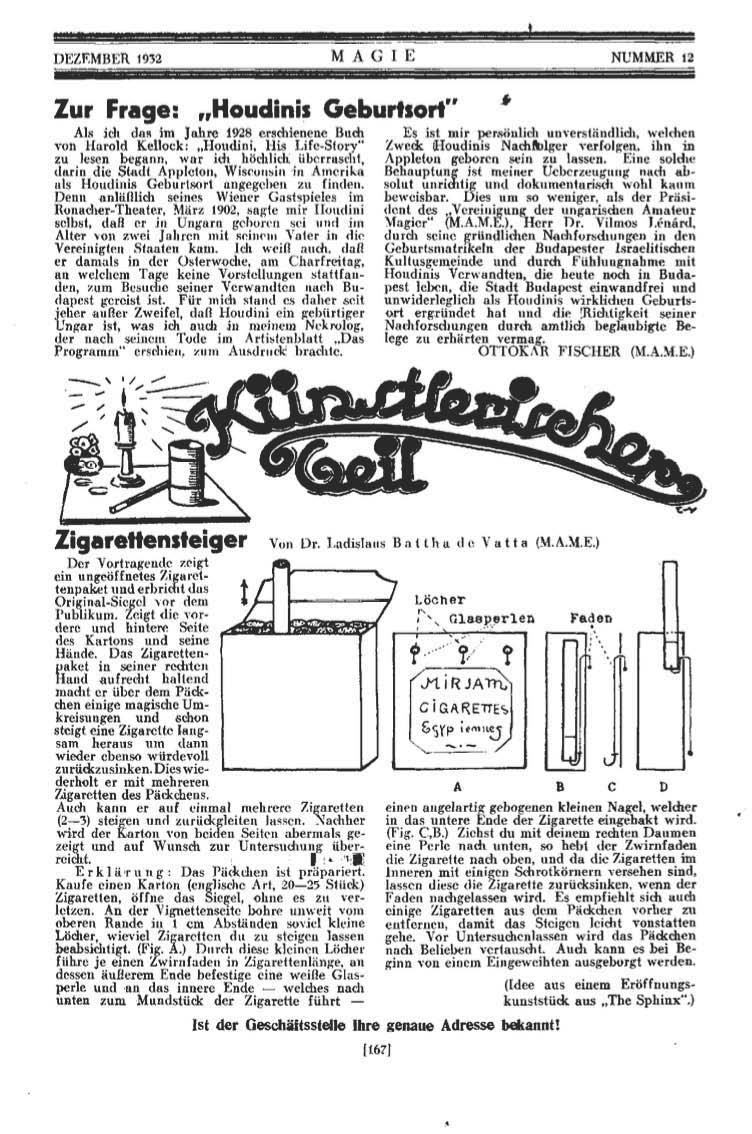 To anyone who even fleetingly occupies himself with the history of magic, it is well known that for so many magicians, not only are the true family and baptismal names unknown, but often even the place of birth and death are shrouded in mystical darkness.

We read in almost all descriptions of the life the world-famous Harry Houdini (Erich Weiss), who died on October 31, 1926, that he was born in Appleton Wisconsin, USA, on April 6, 1874. Already during his lifetime, American called him her son with pride, and still today Houdini is always celebrated by magic circles in America as a native-born American.

I believe I am rendering a service to the history of magic if now, six years after his death, I correct the error about the place and date of his birth and publish a summary of the interesting results of my research on this subject in the columns of the friendly [and] hospitable MAGIE.

This publication will perhaps cause disappointment or embarrassment in America, I will however already now with explain emphatically, that I was prompted to published solely out of my honest conviction that it is my duty – [since I am] in possession of the documents to be cited below – to withhold the truth of history and the magic world no longer.

It so happened that is already in May 1931 that [we had] the luck to have a relative of Houdini (Herr Geza Scheffer, confidential clerk of the large Budapest firm of Wertheimer and Frank) come to the clubhouse of the Society of Hungarian Amateur Magicians, where he gave a presentation [in which he said] that he was married to the niece of Houdini’s mother and that he at one time was also in contact with Houdini by letter. These letters contained inquiries about Hungarian relatives and Houdini still signed one of these letters as Erich Weiss.
In addition to these letters, the above-mentioned gentleman also exhibited to us various photographs of Houdini, his wife Beatrice, his father Samuel Weiss, his sister Cari and a brother Armin. We further learned that Houdini’s grandfather was a Jewish priest in Keszthely (on the Plattensee) and that Samuel Weiss, Houdini’s father, came from Grosskanizsa near Budapest, and worked here as a lawyer. However, he had to give up this profession for the law firms established at that time required every lawyer to have academic qualification, and Samuel Weiss did not possess this. The father now emigrated to America with his wife and three children – Armin, Nathan, Ehrich! – where he procured for himself [a good] reputation and respect as a Rabbi.

Our guest stressed expressly that Ehrich was actually born in Budapest. This statement surprised me very much, and I decided to pursue the matter more thoroughly. My efforts were soon rewarded with success, in that I received from the Israelite Congregation of Pest an extract from a register with the following statement:

Name of the newborn: Erik

Parents’ Address and birthplace of the child: Rákos àrok-Gasse Nr. 1

Celebrant and day of the ritual circumcision: I. L. Schill, on March 31.

I will now be brief. I believed that I was rendering our American friends a service and sent the original excerpt from the register together with the reproductions of the above-mentioned letters and pictures, to the S. A. M. [Society of American Magicians] for publication in SPHINX. To my great astonishment, I received from Mr. B. M. I. Ernst, President of the S.A.M. a cool letter of rejection with the statement that he could in no case accept that my conclusions were correct, and since it could only have been an error, he also advised me, in a tone that seemed disconcerting, against the publication of this material.

After these events it was clear to us Hungarian magicians that it was now our duty, in the interest of historical truth, [because we are] in the possession of these documents, to no longer let the error in regard to Houdini’s birth date and birthplace to [continue to] exist.

I am now in a position to exhibit to the whole magic world a notarized copy of the photograph of that page of the original register from 1874, where the proven date of birth of Harry Houdini (Erik Weisz) was entered. With this the fact is indisputably proved that Houdini was born on March 24, 1874 in Budapest.

Wording of the notarized certification

I hereby attest that this photographic copy corresponds word for word and in [every] number with the dates entered in the birth register under the current/running number 392, on p. 282 of the birth registry H. 1872-74, provided with the heading “1874” available in the registry office of the Israelite Congregation here, at Sip-Gasse no. 12, [and] personally taken inspected by me. Budapest, November 9, nineteen hundred and thirty-two.

Some thoughts on the question: “Where Was Houdini Born?”

When I started to read Harold Kellock’s book Houdini, His Life-Story, published in 1928, I was surprised to learn that Appleton, Wisconsin, was given as Houdini’s birthplace. I met Houdini personally in 1902 at the Ronacher Theatre in Vienna. During our meeting he himself told me that he was born in Hungary and that he was two when his father took the family to America. I remember we met during Easter week, for he scheduled no performances on Good Friday and traveled from Vienna to meet his relatives still living in Budapest. From that point on it was absolutely clear to me that he was born Hungarian, and I mentioned this fact in my obituary of him published in “Das Programm” art magazine.

I do not understand why Houdini’s relatives claim Appleton as his birthplace. This is a falsehood that is not supported by any official documents. Dr. Vilmos Lénárt, President of the Hungarian Amateur Magicians Association, conducted extensive research into the question of Houdini’s place of birth, during which he located a copy of Houdini’s official birth record at the Budapest Jewish Archive. Dr. Lénárt also contacted Houdini’s relatives still living in Budapest and proved 100% without a doubt that Houdini was born in Budapest.