In this month’s posts we would like to publish some interesting documents about Houdini’s visits in Eastern Europe, specifically to Vienna and Prague.

Harry Houdini was scheduled to perform the first time in Vienna in November, 1900. He was contracted by Mr. Waldmann, Director of the Ronacher Theater. Etablissement Ronacher (as it was called at that time) was the No.1 varieté theater in Vienna at the turn of the century. Interestingly enough, the director, Lajos M. Waldmann, was a Hungarian man. His son, Imre Waldmann, was the director of the Budapest Orpheum.

This is Ronacher at its opening in 1872 and today: 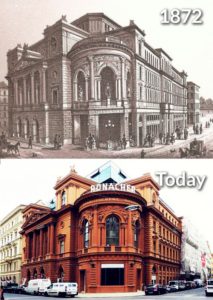 Houdini’s debut in Vienna was scheduled for November 1, 1900. At the end of October 1900 newspapers in Vienna started to advertise Houdini’s debut. The following article was taken from Wienerwald Bote, October 28, 1900. It gives a short overview of Houdini’s life and his amazing tricks in Berlin. The final sentence announces that he will perform at the Ronacher Theater starting on November 1. 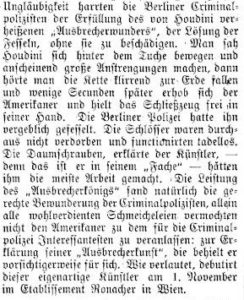 Even on November 1, the Neues Wiener Journal reports that Houdini’s debut in Vienna will take place tonight. „November 1 brings a sensational debut: the very first performance of the American Houdini!”

The next day, unfortunately, brings the bad news: Houdini broke his contract and did not come to Vienna.

The reason: he received such a challenge in Berlin that he could not resist and had to extend his stay in Berlin for a few more days. Not doing so would have meant losing his reputation as the „Handcuff King”! 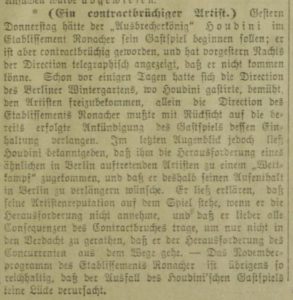 The gossip came just a few days later, that Houdini had to pay a fine, 4000 Marks for breaking the contract. The following article from Sports und Salon tells the details: 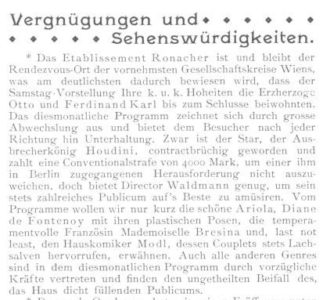 But the story did not end here. Interestingly enough on November 4, Sunday, 1900, the following ad appears in Deutsches Volksblatt:

Today and every day: Harry Houdini. The Handcuff King!

Although Houdini was clearly not present in Vienna, Ronacher still used his name to pull in the audience to watch the November show. The advertisement also appeared on November 6, 8 and 13.

Viennese people must have waited another year and a half to see Houdini live on stage at the Ronacher. But before going to Vienna in 1902, Houdini paid his one and only visit in Prague…

More about his Prague visit in our next post!